“Orders from Germany and abroad are at present widely divergent,” explains Dr. Wilfried Schäfer, Executive Director of the VDW (German Machine Tool Builders’ Association) in Frankfurt am Main. “Following a lengthy period of hesitation, the domestic market is now finally seeing significant capital investment, both in modernisation and in capacity upsizing. The Euro nations likewise showed a just-under-double-figure increase. They offer a solid foundation for progressing the sector’s business. In addition, investment is losing its some of its dynamism, particularly in Asia, because demand in the huge Chinese market is perceptibly cooling down, a trend deliberately fostered by the politicians. There were lower order bookings from India and South Korea, too,” added Dr. Schäfer.

Orders for metal-cutting and forming technology developed equally well in the year’s first half, and exhibited the same pattern for orders from Germany and abroad as for the sector as a whole.

Employment levels reached a new record at almost 73,700 staff in May of this year. The figure had not been higher than this since the early 90s of the last century, directly following German reunification, and in the subsequent years up to 1993.

Capacities were being very effectively utilised in July of this year, at 93.2 per cent. “In fact, capacities are coming up against their limits,” says Dr. Schäfer. According to an Ifo business survey, more than half of the machine tool manufacturers interviewed in mid-year reported material scarcity, and almost 40 per cent complained of labour shortages. “This is attributable to bottlenecks in the entire component supply chain. Important parts are sold out. And commissioning work, particularly abroad, is suffering from staffing bottlenecks,” explains Dr. Schäfer.

Sales, finally, rose by 13 per cent in the year’s first half, thus corroborating the VDW’s production forecast, which is anticipating growth of another seven per cent for 2018. In the reference year of 2017, the year’s second half performed significantly better than the first six months. “If international economic policy doesn’t put a spoke in our wheel with Brexit, trade wars, reversal of globalisation, threats of sanctions, our sector is in good shape,” says Dr. Schäfer of the VDW in conclusion. 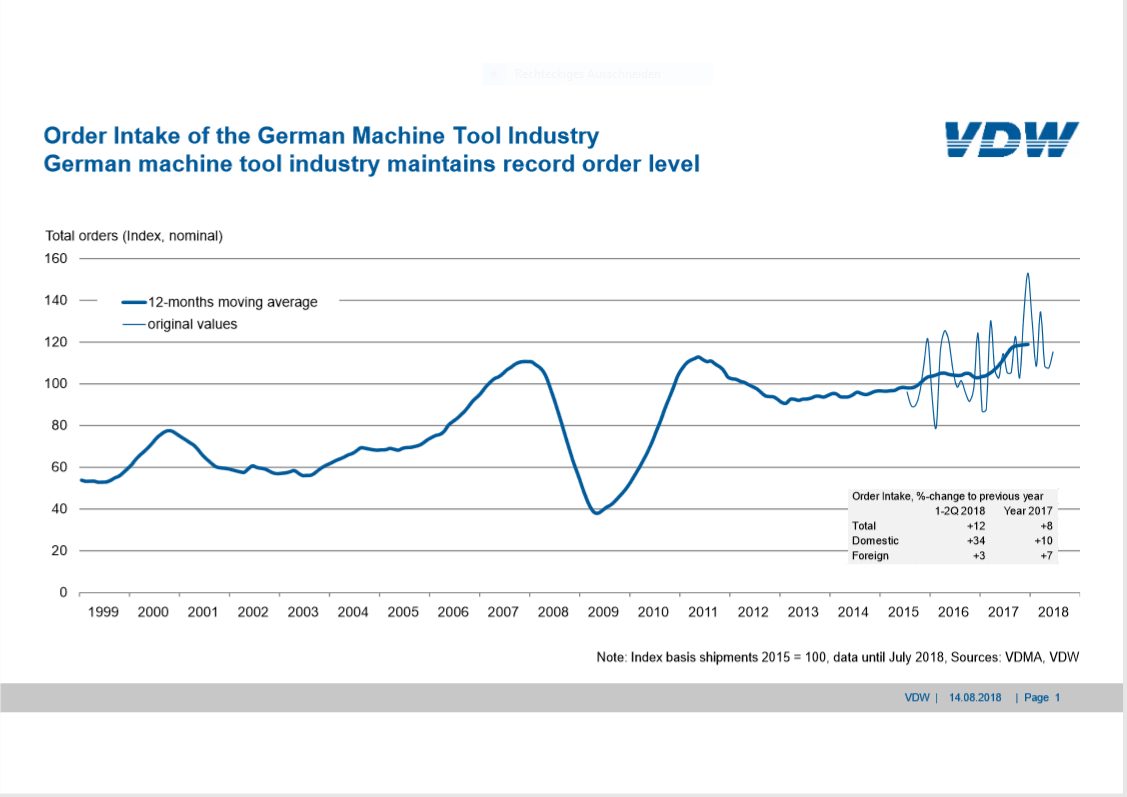