Mexican demand for German machine tools has quadrupled since 2010, reaching roughly EUR 372 million last year. Germany has thus established itself as the third largest supplier to Mexican production companies after the USA and Japan.

In addition to organising presentations, B2B meetings and two factory visits, the German companies also spent time familiarising themselves with the processes in the traditionally strong automotive and aviation industries in Mexico. “The Mexican economy is now looking to take its next steps along the road towards automation, digitalisation and Industry 4.0,” said Johannes Hauser, Managing Director of AHK Mexico (Camexa) and VDW cooperation partner, in Querétaro. “German technology has an excellent reputation and is indispensable for this development. It’s scarcely surprising that Mexico has now become the most important market for German machine tools in Latin America and that Germany has developed into Mexico’s most important trading partner in the European Union,” Hauser continued.

Klaus-Peter Kuhnmünch has followed this development closely. As the organiser of the symposia, Kuhnmünch was in Mexico on behalf of the VDW in 2019 – as well as at the previous events in Mexico City, Monterrey and León in 2009 and 2014: “When they make their procurement decisions, the companies here attach a great deal of importance to reliable quality, but also to their suppliers having a strong presence in the Latin American market. I think it’s no coincidence that 15 of the 17 companies that have accompanied us to Mexico have been here several times with us before and that four of them now have branches in Mexico.”

The Mexico event took on added significance due to the ongoing political disputes with the USA, which had put a question mark over the further development of industrialisation and thus over the demand for German machine tools. “The non-ratification of the new USMCA North American free trade agreement by the USA is certainly not helping the investment climate,” said Hauser, describing the current situation. Nevertheless, it should not be forgotten that “the existing NAFTA Agreement remains in force in its old form until further notice.”

Resolute response in times of upheaval

The long period of growth enjoyed by the Mexican economy recently petered out, with no growth expected in 2019. Gross fixed capital formation is expected to decline by 4.5 per cent in the current year, while exports by German machine tool manufacturers fell by 31 per cent year-on-year in the first three quarters of 2019. “The development is critical right now,” said Hans-Joachim Koschig, Head of Sales for the Americas region at Index-Werke, commenting on the sobering figures. “The Mexican market is very much driven by the automotive industry. We’re currently seeing a certain amount of uncertainty and a reluctance to invest.”

The forecasts for 2020 provide a glimmer of hope, holding out the prospect of a slight recovery. The formation of the new government in the summer of 2018 helped calm the domestic political situation and bring about a return to stability – an important prerequisite for industrial companies which are planning their future production. Kuhnmünch: “It’s all the more important to deliver a resolute response in times of upheaval. From experience we know that this is the time when investment decisions are prepared. The timing of the VDW symposia certainly represented a challenge, but was absolutely right.” Thus, despite the current downturn, the underlying positive development for machine tools basically remains intact: the market volume was EUR 1.5 billion back in 2014, whereas it has been stable at around EUR 2 billion since 2015. Tobias Hügler, Area Sales Manager at SHW Werkzeugmaschinen, hoped that the success story would soon continue: “We’ve enjoyed steadily growing business in Mexico for over 20 years now. This market is very important to us.”

The German manufacturers covered a wide range of machine tool technology in their presentations. The topics ranged from classic aspects such as productivity, quality and sustainability through to the Smart Factory. Gehring Technologies focused on the reduction of combustion engine emissions and on innovative electromobility in Mexico, a country with a strong affinity for the automobile: “Our mould-honing range includes readily retrofittable emission reduction solutions. We showcased our brand new turnkey stator production solutions for electromobility,” said Martin Winterstein, Managing Director at Gehring, presenting his company’s range for the Mexican automotive industry. “Our portfolio is rounded off by additional applications such as the honing of aircraft landing legs or hydraulic cylinders.” Machining centre manufacturers such as Alzmetall, Hermle or Index were also strongly represented. “Topics like 5-axis simultaneous machining fall on receptive ears in Mexico. The aviation industry in particular is very interested in the latest machining technologies,” explains Roland Ilg, General Manager and Chairman of the Alzmetall Management Board.

The German companies came away from Mexico with an extremely positive overall impression. “The two events in Querétaro and Monterrey were a great success,” said Peter Steimer, Regional Sales Manager for Westcoast/Mexico at Hermle USA. “We were able to identify new leads in the aerospace industry to whom we previously had no access and establish very good contacts.” Jürgen Gögelein, Area Sales Manager at Chiron, added: “The VDW symposia in Mexico exceeded our expectations. The high-calibre participants were presented with a range of new developments for the machining of large components in the automotive, aviation and medical technology industries. In many of the meetings we held, we encountered strong interest in our modular software for manufacturing process control.”

The next VDW Technology Symposia will be held in Malaysia in April 2020 and in India in December 2020. 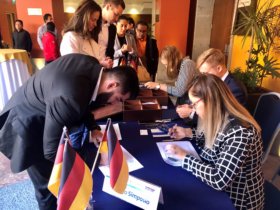