The past year, by contrast, turned out much better than anticipated. “With a decrease of just one per cent, the production result came to almost 17 billion euros, nearly equalling the record level of 2018,” reports Dr. Prokop. The principal contributor here was domestic sales, which rose by 16 per cent. Conversely, exports were down by 9 per cent, a fall primarily attributable to a decrease of 11 per cent in deliveries to Asia and of 16 per cent in deliveries to America. Here, the regional results are dominated in each case by the largest markets: China, at minus 13 per cent, and the USA, minus 15 per cent. Europe, the largest sales region, accounting for more than half of German exports, still performed comparatively well with minus 5 per cent.

Imports were unable to benefit from the good performance of the domestic market and were down by one-tenth. Employment had shrunk by 3 per cent at the end of the year. Moreover, the ifo Institute reported an increase in short-time working to more than 18 per cent of companies. Twice as many firms are anticipating this for the upcoming months. “We attach maximised priority to the preservation of jobs,” emphasises Dr. Prokop. In order to avoid further payroll downsizing, short-time working should be promptly extended from 12 to 24 months, he urges.

Capacity utilisation was running at 81.5 per cent in January 2020.

The ongoing combination of a cyclical downturn, structural transformation in the automotive industry, turbulences motivated by trade policies, and last but not least the coronavirus as well, are dampening the propensity to invest all over the world. Investments in plant and equipment are set to rise by less than one per cent in the current year, according to Oxford Economics, the VDW’s forecasting partner. Only relatively small markets are in much better shape, like Vietnam, Thailand, Slovakia, Hungary and Poland. But they are quite unable to compensate for the sluggishness of the major customer nations China, USA, Italy or France. The consequence is a correspondingly substantial minus for all key statistics in the German machine tool industry during the current year: production, exports, imports and consumption.

Germany retains its top placing in the international rankings

In the international rankings, the German machine tool industry has maintained its position in the top trio, since all other producer nations are struggling with similar developments to Germany’s. On the basis of provisional data for the Top 20 producers, the VDW has calculated for 2019 a decrease in international production excluding parts and accessories of three per cent to 72.1 billion euros. In the top trio, only China, with two per cent, managed an increase. “In comparison to previous growth rates, this is indeed a very modest figure,” says Dr. Prokop, putting it in its due perspective. Japan in third place even lost five per cent. In terms of exports, Germany remains the world champion. Japan in second place saw a fall of nine per cent, similar to Germany’s, while Italy in third place suffered a fall of two per cent. In terms of consumption, finally, the world’s biggest market, China, reported a decline for the second time in succession, of eight per cent, while the USA was likewise down on the preceding year, with a minus of three per cent. Only Germany, in third place, reported a rise, of six per cent.

A fast recovery not in sight

“For large portions of the industrial sector in Germany, the lean period will continue for quite a long time,” predicts Heinz-Jürgen Prokop. Industrial production output in Germany is set to fall once more. Investments in plant and equipment at the principal customer industries will show only a marginal increase. For machine tool consumption, following a slight decline in the preceding year, a minus of one-fifth is anticipated in 2020.

In terms of the Ifo Institute’s business climate and the Purchasing Manager Index from Markit, both of them early indicators for future developments, there are in many areas incipient signs of an upturn. This, however, is no more than a glimmer of hope, since many curves are still deep in the minus zone.

“This means that unlike in previous downturns a quick recovery cannot be anticipated,” predicts Dr. Prokop. Rather, he says, the machine tool industry does not expect order bookings to bottom out until the year’s second half, which will not, however, suffice for an upturn. So production output will only slowly recover, and will take a while to regain the level of recent years.

Digitalisation and sustainability are paramount issues in the machine tool industry

“Difficult times also offer an opportunity to re-invent yourself,” says a confident Dr. Prokop. The biggest leverage will in future be offered by digital networking. This, he said, is the enabler for new business models, a terrain on which a whole lot can still be achieved with appropriate creativity.

Now the machine tool industry, in particular, is a veritable flagship sector when it comes to sustainability. Machine tools made in Germany already rank among the most sustainable products currently available. “We say this in all self-confidence,” emphasises the VDW’s Chairman. They excel in terms of lengthy useful lifetimes. For all components of the machine, spare parts are kept available for long periods. For the control system components, the vendors guarantee software updates for several generations. Machine tools tend to be completely overhauled and resold as pre-owned machines rather than be decommissioned. This leads to a second and sometimes even third machine life. When they are scrapped at the end of their useful lifetime, almost all the materials involved can be recycled or upcycled, since it’s primarily top-quality materials amenable to re-use that are employed. Finally, the machines’ productivity is extremely high. This means every single component is manufactured in an energy-economical, resource-efficient process.

Besides optimising the machine components, the manufacturers concerned devote particular attention to energy consumption during the utilisation phase. The raw materials used, and the power and media consumption levels, co-determine the CO2 balance of the production operation. This is why, for example, manufacturers are working on software with which waste and rejects can be further reduced. In conjunction with new hardware, moreover, media consumption levels can be downsized by up to 70 per cent.

The examples cited show that very numerous points of leverage need to be activated in order to develop new sources of turnover and accomplish the transformation towards more sustainability. This also applies for the structural changes in the automotive industry, which are still far from having been completed. It is, in particular, unclear what drive technology will be used to what extent by when, and which makes the greatest contribution towards reducing CO2 emissions. Hybridisation, full electrification and battery technology, fuel cell and synthetic fuels, everything is under discussion. “We are absolutely convinced that there have to be differentiated solutions for disparate requirements,” says the VDW’s Chairman Dr. Prokop.

The automotive industry and its component suppliers purchase a significant proportion of machine tool production output, between 35 and 40 per cent. In actual fact, however, these deliveries are not destined solely for the drive train. The association has recently conducted a more differentiated analysis of this, which revealed that in 2019 about 60 per cent of total sales with OEMs and component suppliers were accounted for by engines and transmissions, 40  per cent by bodywork and other system components. It emerged, however, that the order bookings in the power train category are currently showing a significant decline in volume.

It remains undisputed that the transition to new drive technologies will be a protracted process. The VDMA’s study on “Drives in Transition” revealed in its latest update that by 2030 a good 20 per cent of vehicles, referenced to new registrations in Europe, the USA and China, will be fully electrified. The three regions constitute about half of the international automobile market. The result means 64 per cent less value added in the production process with an exclusively electric drive, but growth of almost a quarter in the value added for a hybrid drive.

This also leads to new opportunities for the machine tool industry, not least in the production of components for electric motors, the manufacture of components in the battery stack or high-performance electronics.

“The facts that sales of battery-electric cars have stalled in China and the USA, the Chinese government has discontinued its subsidies, and hardly any electric vehicles are being bought in Germany despite financial support, however, permit justified doubts to be voiced as to whether concentration on a single technology is the right approach,” warns Dr. Prokop. He reiterates the recommendation not to rule out any of the new technologies per se, and adds: “Our concern must be to repeatedly urge that all modification measures be controlled with free-market-based instruments and the best CO2 avoidance options be sought on a technology-neutral basis.” 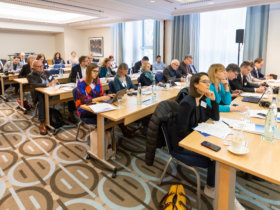